Robert De Niro Lets Loose On Bernie Madoff, How Netflix Is A Savior & Why The Emmys Should Dump On Trump 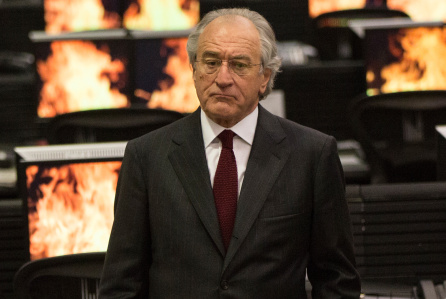 Robert De Niro has been nominated seven times for an Oscar and has won twice, yet when he sits in the audience at the Microsoft Theatre on September 17, it remarkably will be his first time as an Emmy contender. He is up for Lead Actor in a Limited Series or Movie for his searing work as Bernie Madoff in HBO’s The Wizard of Lies (he also is nominated for Outstanding Television Movie as an executive producer). I guess it’s not that remarkable since, other than playing himself a few times on sitcoms and elsewhere, De Niro has been one of the few actors of his generation who had not succumbed to the lure of the small screen and the kind of material that is available there now.

He almost didn’t do this part either, as he told me when we spoke last week, but when director Barry Levinson came aboard as director, and with the filmmaker’s son Sam as a co-writer, it started to come together. “I thought it would be a good project, and I was happy that they did such a good job together, but I wasn’t sure if I even wanted to do it because of the timing, and I didn’t want to start working again right away. But of course with Barry and Sam I liked the idea that a father and son would be working on it. I just liked that whole thing and the feeling that they had for the material, so I did it. I sort of felt I had to and I’m glad I did, of course.”

He had a head start because he and Madoff, whom he never met and still has no idea if he even saw Wizard of Lies, have certain vocal and physical features that are similar between them. But to make it more authentic, De Niro shaved his head so the hair piece would match perfectly on his actual head, rather than a pate. He relied on others to tell him what he needed to know about Madoff without having a face-to-face opportunity, unlike his equally Emmy-nominated co-star Michelle Pfeiffer, who did meet with Ruth Madoff. He normally would want to meet the person he is playing, but not in this instance since it seemed very problematic. “As much as I wanted to meet him, I also felt I didn’t want to be used in some perverted way endorsing him or this or that,” De Niro said. “So I said, ‘Just let it go.’ I met relatives, one of his lawyers, people who worked with him, family members. I read books and so on, and I went that way. And I saw whatever I could of him on television — which of course is a lot.”

De Niro added that Ruth was not one of those people he met with — though he says if she wanted to meet him, he would have been there in a second. He always has seen this as a family story in many ways, as well as the bottom-line dynamic between Bernie, his wife and the kids (one son eventually committed suicide, the other died of cancer in 2014). He doesn’t think they knew much of what he was doing as he played out his multibillion-dollar Ponzi scheme for years, taking money from one client and giving to another. “I feel she didn’t know and the kids didn’t know. You see what happened to the kids,” he said.

One of the few people who did meet Madoff in prison was Diana Henriques, author of the book the teleplay was based on, and De Niro suggested that they have her play herself interviewing De Niro as Madoff, just as she did with the man himself. “My feeling was, always use people who are real because they know what questions to ask, and she’ll ask real questions that I can field, so I thought it would be great to use her,” De Niro said, adding that they improvised much in those scenes. Henriques said sitting across from De Niro as Madoff was eerie at times because she thought he was just like the real thing, a compliment the star appreciated when I repeated her words to him.

Some critics have pointed out parallels between what Madoff was able to get away with for all those years and what is going on in the Trump administration now. Of course, De Niro has been vividly outspoken about Donald Trump during the campaign and since his election telling me that “if he was smart, he’d be even more dangerous. He’s dangerous as it is. He’s terrible, and a flat-out blatant racist and doubling down on that, and it’s good that he does because he’s going to sink himself,” he said, very much on the record indicating that the title of this movie could very well apply to the president.

De Niro hopes to reach even a bigger audience with these kinds of socially pertinent stories that he hasn’t been able to reach on the big screen. He even asked me how many viewers I think HBO plays to. It is one reason they chose the medium for this project, and in fact on the day we talked it was announced that De Niro’s Tribeca Film Festival would be adding a separate edition in September devoted exclusively to television. He also is working with his Silver Linings Playbook director David O. Russell on a new untitled series for Amazon and Harvey Weinstein, another family story, which has a two-season commitment out of the gate. “I guess we’ll see how well it does. If it does well, we will continue,” he said. There is even talk he may be doing a small-screen version of Wag the Dog, though he wasn’t sure where that was in development at this point, referring me to his Tribeca and producing partner Jane Rosenthal for answers. If ever there was something so prescient with what is going on today, 20 years after the film came out, it is Wag the Dog. “Well, you know, when we have a dumbbell like Trump,” he said with a laugh before launching into another expletive-laden riff on the former reality TV star.

De Niro certainly hasn’t given up the movies, a field in which he’s become one of the all-time greats, but TV, and being an Emmy nominee, is a new frontier for him. “Television in many ways has gone further than film, especially when you can tell a story longer and tell it with more truth and less restrictions,” he said, noting that the broadcast network way of doing things when he was younger did not offer this kind of opportunity that he is now sparking to so enthusiastically.

In addition to saying nice things about Amazon and HBO, he also is high on that other streamer  — Netflix, which has coughed up the reported $100 million budget for Martin Scorsese’s long-in-the-works gangster saga The Irishman, which has a script by Steve Zaillian and boasts a cast that also includes Al Pacino and Joe Pesci and previously was set up at Paramount. Although Netflix, with its day-and-date release strategy, has been controversial De Niro has no problem with it — even if he still prefers the theatrical experience. “I think that’s good also because we need the money to do it right and it just wasn’t financeable in another way, in the traditional film way, if you will,” he said.

The Irishman will push the technology envelope by de-aging its three stars by several decades, which De Niro jokes should be able to make it possible to extend his career another 40 years or so. “They’re trying to really do it as the best it’s ever been,” he said. “We’re doing the young stuff first and taking it decade-by-decade so that later the oldest stuff will be closer to our own age. So they’re trying to really make it as good as they can make it, and that’s the goal that it can be something special that everyone would want to see and see it done as well as it can at this point. I’m excited by it and looking forward to doing it.” He says he starts shooting in late September, the day after the Emmys.

And speaking of that awards show, De Niro has a suggestion for the producers that brings us right back to, you guessed it, the president of the United States. “Even at the Emmys it should be a kind of theme in some way — however, you know, balanced it could be so we’re not making it all about that. But at this point, we’re at a crisis in this country with this fool, who never should have gotten into the position that he’s in,” he said. When I noted that the Emmy host this year is the famously anti-Trump Stephen Colbert, De Niro simply said, “Yeah, well, he’ll do it.” With De Niro poised to win his first Emmy, CBS had better have its hands on that censor button.

Robert De Niro Lets Loose On Bernie Madoff, How Netflix Is A Savior & Why The Emmys Should Dump On Trump